Over the last couple of weeks we’ve talked about birth records and marriage records, which can be used in your genealogy.  Today I want to talk about death records.

Before getting started I want to rewind to last week’s post about marriage records.  In that post I neglected to mention a valuable piece of information.  If you’re searching for a marriage record by the bride’s last name and you’re unable to locate it, consider the possibility she may have been married before and didn’t use her maiden name on her new marriage license application.  This happened to be the case with my grandparents’ marriage record.  It was a good thing I was able to provide the names of both the bride and groom when I requested the record copy because my grandmother used her last name from her previous marriage (Woods), not her actual maiden name (Brown). 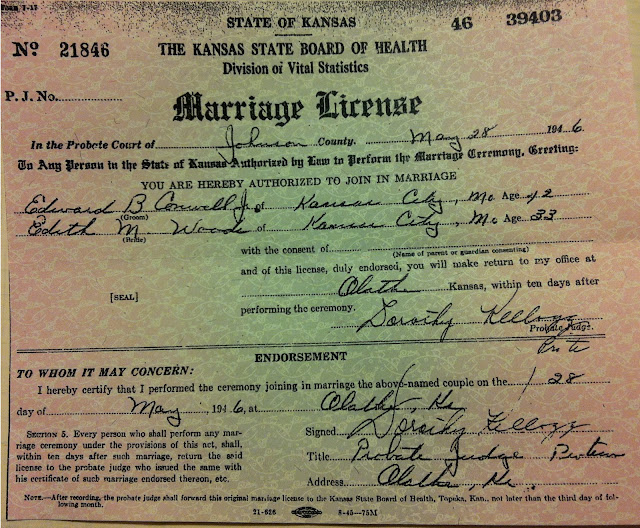 Now, back to the intended subject of this post: death certificates.  Now, keep in mind that prior to 1900, many states had incomplete vital records.  Most birth, marriage and death records were kept by churches prior to when standardization occurred in the U.S.  A good resource to refer to when trying to determine if you’ll find birth or death records in the state you’re looking at is the ProGenealogist website.  You can pretty much assume the East coast states are going to have earlier standardized records than the Midwest or West coast states, simply because of when the states and state governments were formed.

So what type of information can you find on a death certificate? 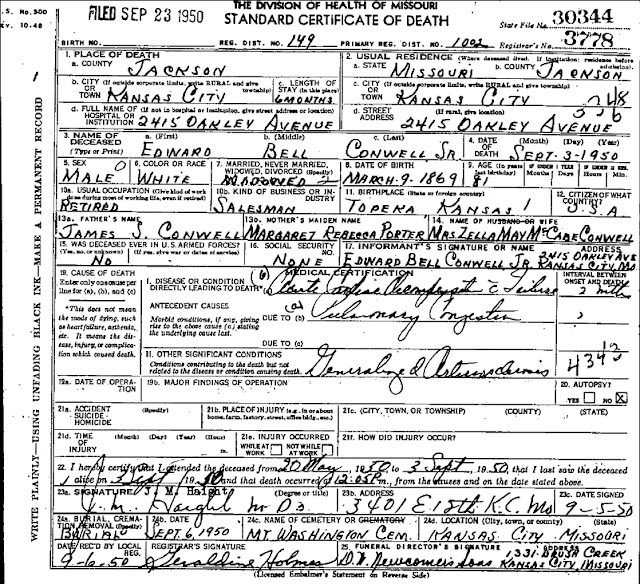 This death certificate is a veritable gold mine of information.  It shows most of the information on the bulleted list above.  The only thing I don’t see on the certificate that is listed above is the place of birth of his parents.  In addition I can tell that he only resided in Kansas City, Missouri for 6 months and the time between the claimed onset of the cause of death and his actual death was 2 months.  This would lead me to believe he moved from his prior residence to the place of death for health reasons.  I happen to know the place of death was the house my grandparents owned at the time, so he died while living with his son.

Something that stuck out at me on this death certificate was the answer to his marital status at the time of his death.

The answer itself is not odd.  Great-grandma Zella died two years before in 1948.  What’s interesting to me is that is looks like the number two is listed in that box with his widowed status.  I’m possibly reading too much into that because I’ve never heard of great-grandpa having been married before he was married to great-grandma Zella, but stranger things have happened.  I also double checked the family history book my grandparents made for me when I was a child and nothing is listed there for a second wife so I suspect it may have just been a notation of some sort but I’ve added it to my list of things to ask the parental unit in the future with the hope that she’ll know for sure (just in case I’m wrong).

The other thing that was included with the scan of this death certificate was the statement by licensed embalmer.  However, as you can see it wasn’t actually completely filled out.  I wonder if they chose to not embalm him or if the embalmer just didn’t bother to fill out the appropriate blanks on the form?

About Danni 116 Articles
Join me on my genealogical journey where I hope my experiences, discoveries, mistakes, and successes will help you on your journey. We'll throw in some bits of history for a little flavor and that is what makes up Talking Box Genealogy.
Website Facebook

I have been bitten by the blog bug.  Ever since discovering genealogy blogs I’ve been looking for good ones to follow, so Geneabloggers’ blog listing is a genealogical Christmas for me.  I’m slowly making my […]

On the Road Again! 2018 NGS Conference: Paths to Your Past

May 1, 2018 Danni blog, blogging, family history, genealogy, genealogy research Comments Off on On the Road Again! 2018 NGS Conference: Paths to Your Past

We had the best of intentions. But you know what’s said about that, right? The spousal unit and I had the perfect travel schedule for our drive to Grand Rapids for the NGS conference this […]

I’m loving being a member of the Geneabloggers community.  There are so many new blogs for me to look at so it was very difficult to make a decision on which one to highlight for […]

Join me on my genealogical journey where I hope my experiences, discoveries, mistakes, and successes will help you on your journey. We'll throw in some bits of history for a little flavor and that is what makes up Talking Box Genealogy.