In my last post I left you with a little teaser for my next Around the Town Thursday post.  I promised you something special so here it is:

Okay, so it’s not exactly around THIS town but my intention was to expand my Around the Town radius, although the original plan was to expand little by little.  So, um…yeah, that brings us to this week’s post on my travels to Machu Picchu! 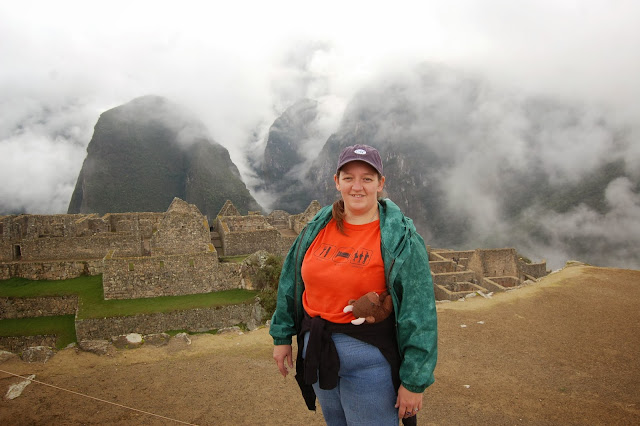 Me (and Jack, who is located in my belt, haha) in front of the Central Plaza at Machu Picchu

In case you’re wondering about the buffalo in my belt in the picture above, the buffalo’s name is Buffalo Jack and he’s my traveling companion.  Jack was adopted in Fort Hays, Kansas.  D1 and I were there for one of my son’s band performances and I thought Jack was kind of cute.  D1 purchased him for me and we started taking pictures of him in different locations in Fort Hays.  It expanded from there and now he travels with me whenever I go. 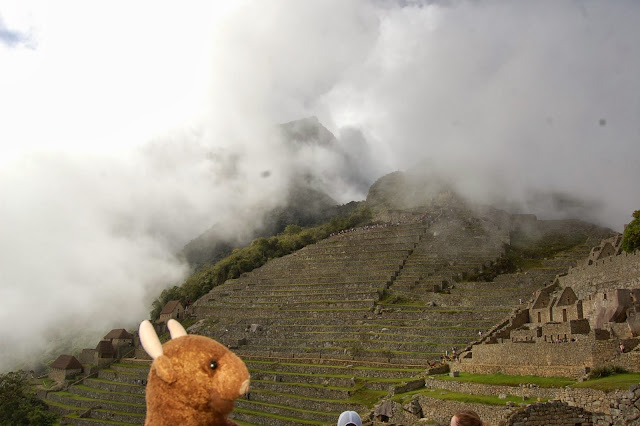 Machu Picchu was built by the Incan people about 7,000 feet above sea level in the fifteenth century.  According to UNESCO, “The approximately 200 structures making up this outstanding religious, ceremonial, astronomical and agricultural centre are set on a steep ridge, crisscrossed by stone terraces.”  According to the tour guide I had, Machu Picchu was never actually considered to be “finished”.  There was always ongoing work.  It was called a “Lost City” because when the Incans carved the city out of the surrounding landscape they used the landscape to their advantage and carved WITH the mountain, never destroying what they didn’t have to in order to build this beautiful place.  There are many theories as to what Machu Picchu was used for and no one has yet to learn the real purpose of it. 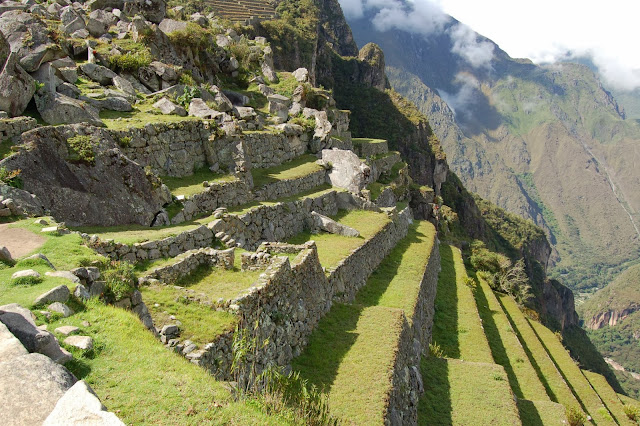 Most people, when they decide to go to Machu Picchu, plan for months.  They make preparations well in advance and usually go during the good weather season.  That’s not what I did at all, haha!  I was scheduled to travel to Peru for a work meeting and whenever I travel for work I always try to see at least one interesting site in the locality I’m going to be in.  That’s how I’ve managed to see Tikal, climb Pacaya Volcano, walk the grounds of Chichen Itza, stand on the cliffs of Tulu’um, watch flamingos in Celestun and, now, climb the terraces of Machu Picchu and ascend the stairs of Huayna Picchu (okay, okay, so it was more like crawl up the stairs of Waynapicchu…no judging, LOL).

Due to some indecision no arrangements for Machu Picchu were made prior to leaving the States.  D1 worked hard to help me make a tentative itinerary, since I’m a person that prefers to have a plan in place when I travel.  For anyone thinking about going to MP this is NOT my recommended course of action.  I strongly recommend you make your arrangements prior to leaving and definitely with a reputable tour company.  You may pay a little more on the front end but you’ll be more likely to get exactly what you want.  If you like a little adventure, go with a tentative itinerary and wing it.  It wasn’t awful but a little pre-planning on our part would have allowed us more time to enjoy MP.

As popular of an attraction as MP is, there is no direct way to get to MP.  From Lima (where my meeting was) I had to take a plane to Cusco, where a car picked us up and took us to a train station in Ollantaytambo (pronounced Oy-an-tay-tahm-bo). 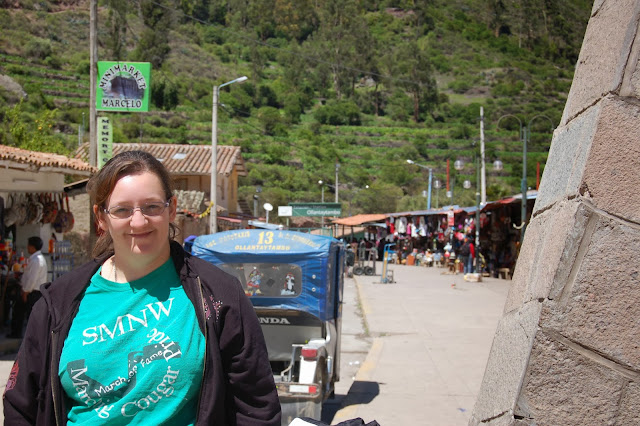 Waiting in Ollantaytambo to take a train to Aguas Calientes! 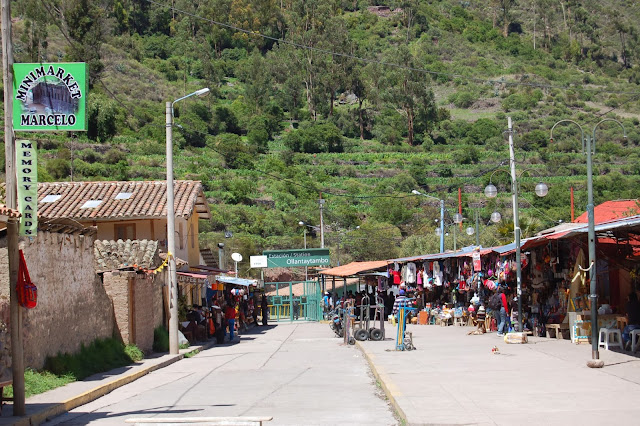 From Ollantaytambo we took a train (I highly recommend taking the Vistadome either going or coming back if you can, it’s really neat) to Aguas Calientes (known now as Machu Picchu Pueblo).  We used Peru Rail because I really wanted to ride the Vistadome train.  The picture of the Vistadome on Peru Rail’s website is pretty misleading (it shows an almost fully glass train car but the actual train cars simply have windows in the ceiling of the car) but it’s still neat to be able to look up and see the tops of the mountains. 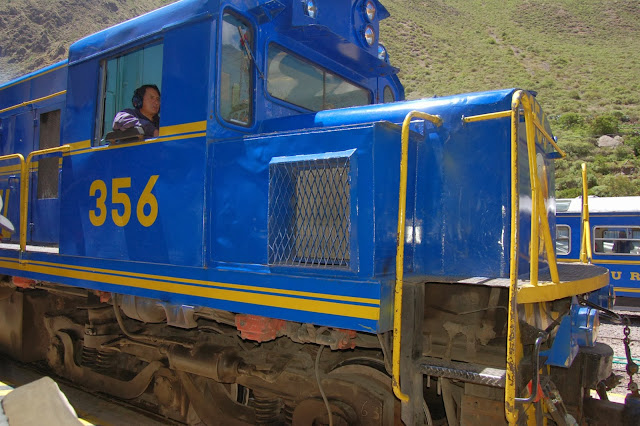 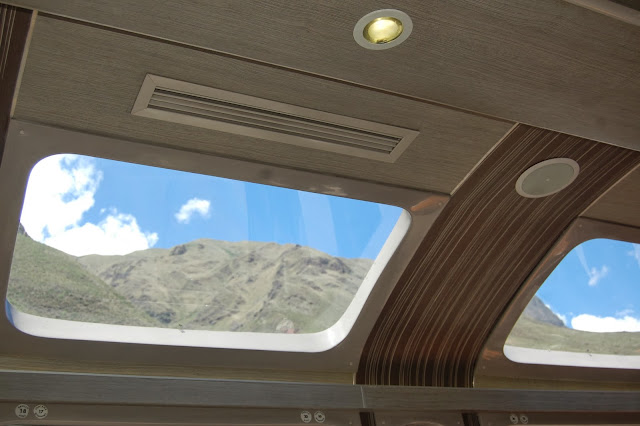 Upper windows of the Vistadome train

The train ride takes about an hour and a half to get from Ollantaytambo to Aguas Calientes and the scenery was beautiful.  I was able to mark another item off my bucket list in addition to going to MP…my first train ride! 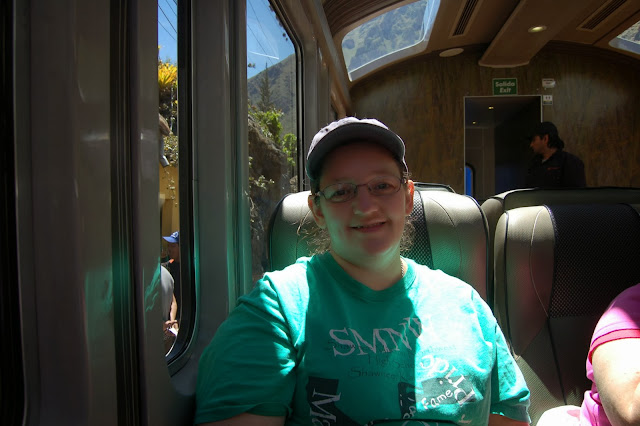 On the train to Aguas Calientes!

We were served a nice little snack on the train, complete with a llama tablecloth! 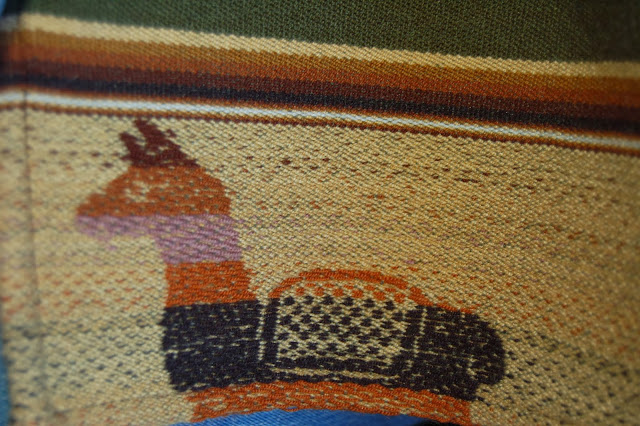 When we arrived in Aguas Calientes, we located our hostel and checked in.  I was pleasantly surprised with how nice the hostel was (considering it’s remote location).  They really worked hard to make sure we were as comfortable as possible.  The only issue I had was the toilet was clogged in my room but the staff at the hostel immediately fixed it.  They also offered a baggage hold for guests after check out while the guests toured MP.

We spent a little time shopping in Aguas Calientes, grabbed some dinner and went to bed early since we planned to get up before sunrise so we could (hopefully) watch the sunrise in MP.  It was pretty questionable whether we would actually get to see the sunrise in MP however, because November is the rainy season and MP is so high it tends to be pretty foggy.  But we took the first bus up to MP where we met our tour guide the next morning.  I discovered the joys of having next to no lung capacity at all in Aguas Calientes and it wasn’t getting any better in MP.  What can I say, I’m a Midwest gal thru and thru.  But I kept pushing onward and upward with our tour guide cheering me on until we reached our sunrise viewing location. 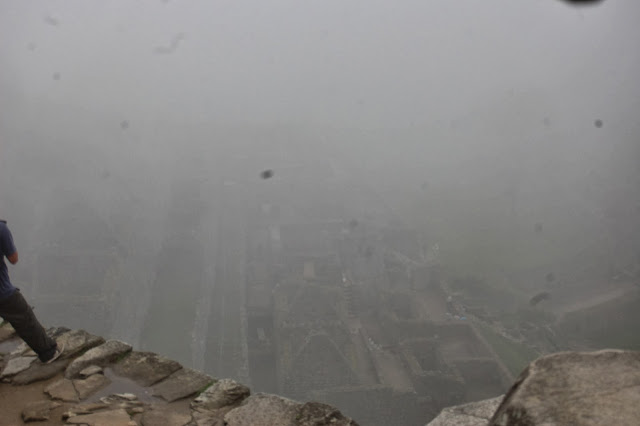 Unfortunately we did not get to see the sunrise.  But as I said, with it being November it was pretty questionable.  Our tour guide went out of his way to make sure we knew this in advance so, while I was a little disappointed, it wasn’t unexpected.  After the sun rose and the fog began to burn off, the tour guide took us on a two hour tour of the ruins explaining what different parts of the ruins were and how the residents of MP might have lived, worked and even celebrated.  Interestingly enough, the tour guide told us that nowhere in the Incan language (that had been discovered at this point) was there a word for war or warfare and that the Incan people were known as peaceful, highly intelligent scholars and workers.  The tour was great.  Well worth every minute and every penny spent on the guide.

Considering we barely had a plan for our trip to MP we managed to hit the jackpot and got tickets to climb Waynapicchu, a massive mountain about 1100 feet above MP that the Incas built a trail up the side of and temples and terraces on top of.  The climb up Waynapicchu is a restricted activity.  There are only 400 people a day allowed to climb WP and it’s done in two groups.  The first group must begin their climb between 8:00am and 9:00am while the second group must begin their climb between 10:00am and 11:00am.  If you don’t arrive to begin your climb within the specified start time you’re not allowed onto WP. 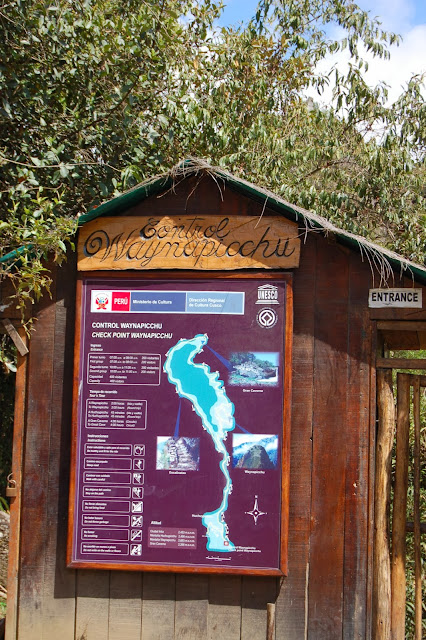 Entrance to Waynapicchu with a map showing different routes you can take,
some longer and some shorter. 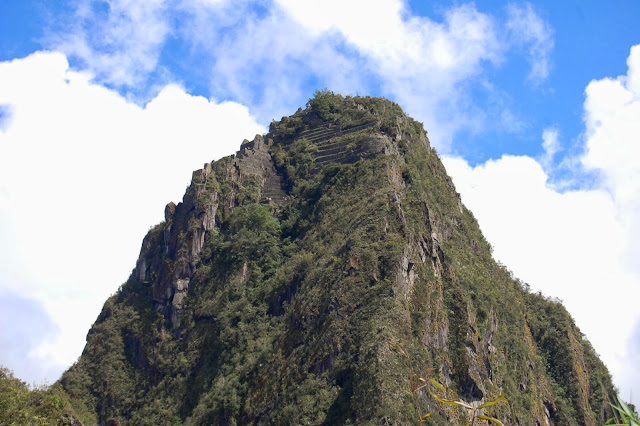 Waynapicchu, if you look closely you can see the terraces and temples on top

And for good reason.  The trail up WP (and I use the term trail very loosely) is narrow and steep at times.  It was a difficult climb for someone like me who hadn’t make any advanced preparations physically and had little-to-no lung capacity. 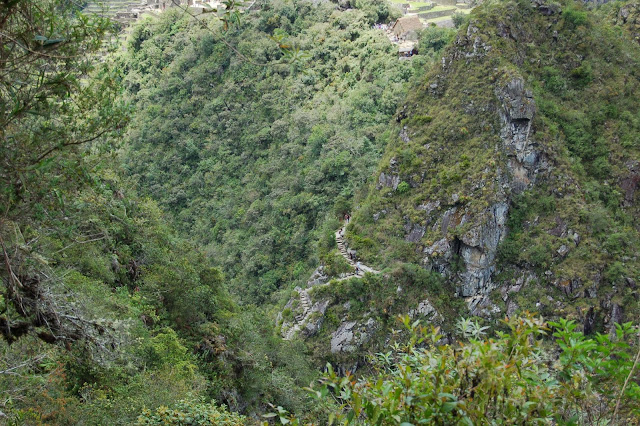 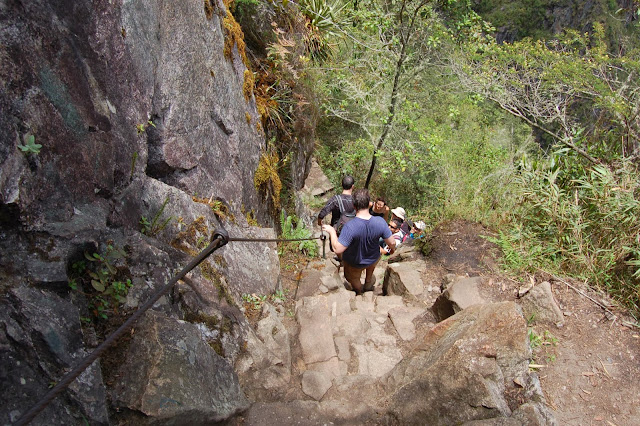 Coming down the train…WHOA that’s steep!

Despite the lack of planning going to MP was well worth the time, money and effort.  Here’s some recommendations I have if you’re thinking about going: 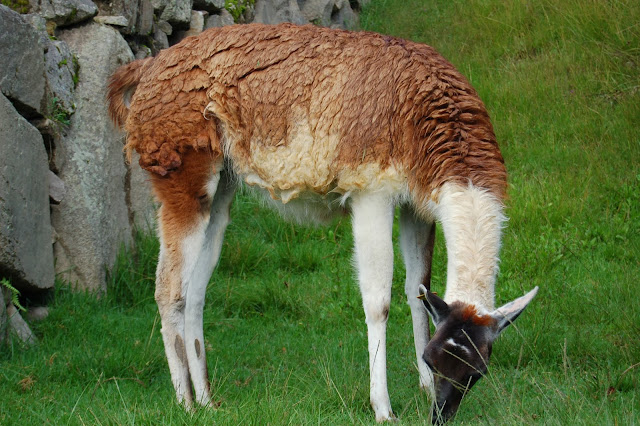 A local Machu Picchu llama (or alpaca, I can’t remember which has the longer neck!)

Above all else enjoy yourself.  Machu Picchu is an UNESCO World Heritage Centre and is absolutely worth the time and effort to see.  I enjoyed the time I was able to spend there and hope to go with D1 one of these days! 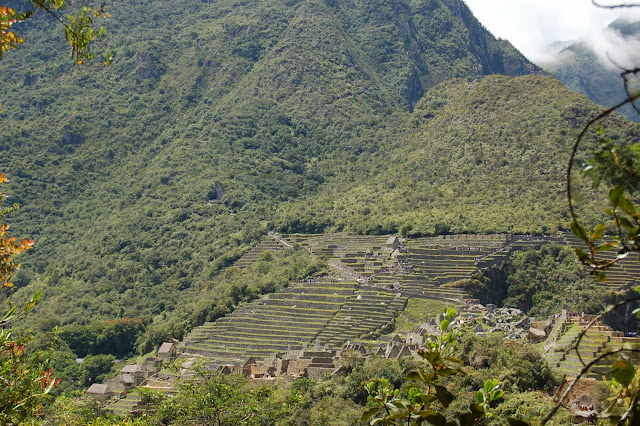 About Danni 116 Articles
Join me on my genealogical journey where I hope my experiences, discoveries, mistakes, and successes will help you on your journey. We'll throw in some bits of history for a little flavor and that is what makes up Talking Box Genealogy.
Website Facebook

Welcome to another Around the Town Thursday!  Now I know what you’re thinking: “A bridge??  You’re writing about a bridge??”  But this isn’t just any bridge.  Today I’m highlighting the Twelfth Street Viaduct Bridge in […]

May 3, 2018 Danni blog, blogging, family history, genealogy, genealogy research, research Comments Off on Day 2 Recap – NGS 2018: Paths To Your Past

And the fun just keeps coming! Day two of NGS provided me with several more fantastic sessions and networking with fellow genealogists (and who doesn’t love that?) The sessions I attended today were: German Trails […]

Getting Back in the Swing of It – 2017 NGS Conference: Family Lives Here

My blog has suffered a bit since I began ProGen 18 months ago but I’m happy to say that I completed ProGen last month and it was absolutely worth all the work! Just in time […]

Join me on my genealogical journey where I hope my experiences, discoveries, mistakes, and successes will help you on your journey. We'll throw in some bits of history for a little flavor and that is what makes up Talking Box Genealogy.